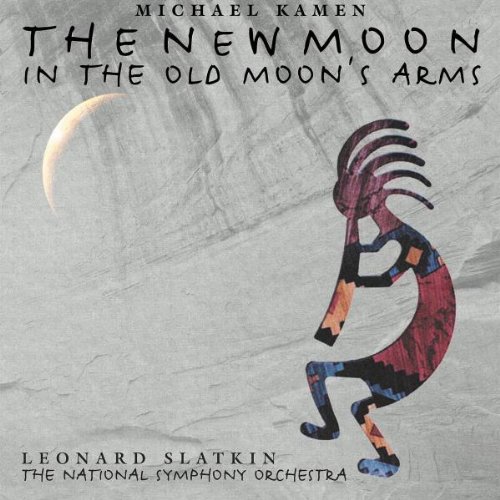 Michael Kamen's latest work The New Moon in the Old Moon's Arms is a symphonic poem inspired by the history of the Native American Anasazi people who mysteriously vanished almost 1000 years ago. They had lived until then in what's now New Mexico, Colorado and Nevada; and without the wheel or horse, they built complex homes, miles of long, straight roads and astronomical observatories. They also produced wonderful artistic visions on the canyon walls, including Kokopelli, the hump-backed flute player. The title of the album is quoted from an Iroquai Indian who Kamen met as a little boy and symbolizes "a glimpse of the future in the light of the past." As a committed humanist and a devotee to the American Indian, Kamen chose to mark the new millennium with a symphony that tells a story about the past that makes us consider the future with a message of compassion and humanity.

Also on the album is Mr. Holland's Opus - An American Symphony. It has been arranged from the original music composed by Kamen for the critically acclaimed film "Mr. Holland's Opus", starring Richard Dreyfuss. The symphony features Leila Josefowicz on "Cole's Tune" (track 9). It was recorded in London in the Summer of 2000 with the BBC Symphony Orchestra, conducted by Leonard Slatkin.

Michael Kamen is a multitalented, multifaceted musician. Though originally classically trained, he soon turned to writing in other styles and is now famous mostly for his film scores, several of which have won prestigious awards and nominations. He has been credited with successfully bridging the gap between the worlds of classical and pop music, and The New Moon, commissioned by the National Symphony Orchestra and Leonard Slatkin to celebrate the new millennium, is described as "his first classical symphony." Inspired by the history of the Anasazi people, Native Americans who lived in the Southwest and vanished 1,000 years ago, and the legacy they left in paintings on the canyon walls, its only "symphonic" feature is the recurrent use of a lead-theme given to the solo flute and solo cello, which symbolize certain characters in the Anasazi story. Unfortunately, the theme, based on a three-note figure, is used mostly in endless sequences. The piece alternates solemn chorales with increasingly wild dances Kamen calls "Scherzos"; the orchestration is lush and overloaded but effective, thanks mostly to the excellent soloists. Mr. Holland's Opus--An American Symphony is drawn from the soundtrack to the film of the same name. Despite its title, it hardly resembles a symphony, and it is difficult to take the bombastic, grandiloquent Finale seriously as representing the masterpiece of the film's protagonist, an idealistic young teacher and ambitious composer. Calling this music "classical" is a condescending misrepresentation and a disservice to its composer. Rather, it should be accepted for itself and its own real qualities: pleasant, singable melodies, simple, tonal harmonies, luxuriant orchestration, spicily rhythmical, humorous Scherzos. Clearly, Michael Kamen writes what's in his ear and heart, and he deserves respect for his courage and honesty. --Edith Eisler

"New Moon is Kamen's latest effort to demolish musical barriers, barriers that to him never existed." -- "i"Washington Post"br""br""The quality and inventiveness of this symphony are astonishing..." -- "i"Washington Times"br""br""Time and time again Michael Kamen has successfully bridged the gap between the Classical and Pop world. There's nobody better." -- Sting